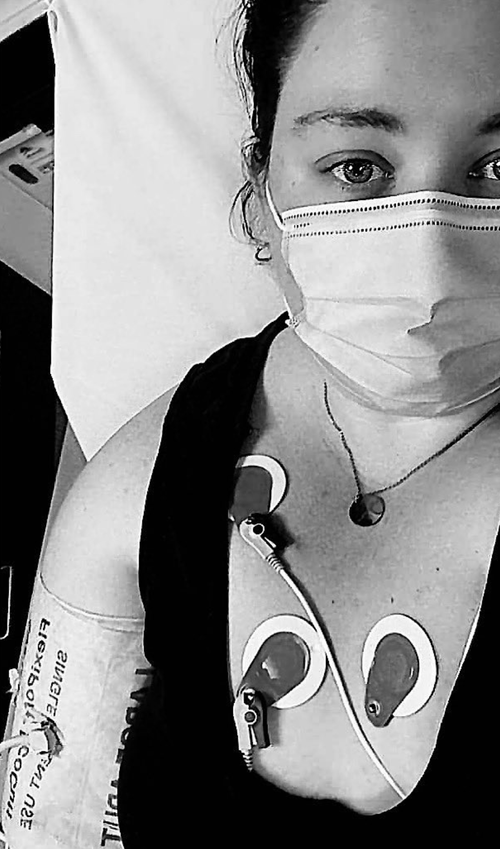 I received the second Pfizer vaccine on October 9th 2021. I started having severe chest pains and pain in my right arm through to my shoulder and up my neck and back of the head on the Monday with a rash/swelling at the vaccine site. I went to the doctor’s Monday afternoon to which he put me on steroids for two days.

I took steroids, Advil, and Panadol as advised with no change and pain got worse. I called 13Health Tuesday night to which they then called an ambulance and took me to the Prince Albert Hospital.

Upon arrival, they took blood and did an ECG before giving the all clear. No one told me I have raised white blood cells until I got to the Gold Coast University Hospital on the Wednesday. The Prince Albert Hospital doctor told me that the pains and severe rash I was experiencing was due to a reaction from the contraceptive pill to which I have not been on for three years and said that the vaccine site was swollen and red due to a bandaid reaction to which I am not allergic to anything. They said they could no longer help me and discharged me at 3:30am on the Wednesday morning. I did have a chest x-ray also that showed nothing. No other tests were done.

I was still experiencing the chest pain and wanted a second opinion to which a nurse told me to get on my out of the Prince Albert Hospital so I went to the Gold Coast University Hospital on Wednesday October 10th 2021.

I was at the Gold Coast University Hospital for approximately five hours. They ran an ECG and took bloods but did not do any other tests. The doctor spoke to me in length that it could be anxiety, it could be weight, but said out right that it was not due to the Pfizer vaccine but spoke in the exit doorway that there are symptoms of pericarditis and proceeded to tell me with my husband as witness that there was raised white blood cells at the Prince Albert Hospital and that there was abnormal rhythm on the ECG that no one told me about but she then told me that I need to go back to my GP and get a referral to monitor blood pressure as it was still high but the nurse did not take it properly with putting it half inflated on my arm. Also, the GP was to monitor heart palpitations.

I went to the GP the next day and showed them my discharge letters to which he said I needed another blood test of which I already had two of the same thing and he proceeded to be more worried about moving his Porsche out of the storm than to speak with me more about this and said if my chest pain gets worse to go back to the emergency department. I tried to take what was advised regarding Advil and Panadol over the next couple of days. I did not fill a script for undone from the Gold Coast University Hospital as it makes me sick and I feel it does not give me the pain relief I need.

Over the course of the next three days, I felt the chest pain was still there but was taking Advil every four hours and Panadol every two hours to try and subside. On the Sunday, my feet, legs, and hands started to swell again to the point of painful sensations in all areas and pain excruciating in my left leg along with a migraine and pain in the right shoulder and central chest pain again.

I spoke with an afters hours Telehealth doctor who advised me that he thinks it is myocarditis and pericarditis and to call an ambulance. I rang the 13Health number and they advised the same — to go back to the hospital. My husband called an ambulance on Sunday October 17th 2021 at 9:10pm. I was struggling to breath again with severe chest pain, leg pain, swelling, hands trembling, blurred vision, and pain radiating down my right up as well s my right shoulder to neck. I have had blurred vision on and off on the right side.

I was in adult acute bed four at Logan Hospital and had the doctor consistently come in and try and convince me I was like this due to anxiety and my weight. He said I was obese and that they had ran all the tests they could. I said that if they didn’t perform bloods and ultrasounds, I would ring 13Health for Ryan’s rule. I Ryan’s Rule is named after a young boy, Ryan Saunders, who died in a Queensland hospital in 2007. It allows parents to get their child’s care reviewed, if they think their concerns aren’t being listened to by hospital staff. I spoke to a Telehealth nurse on shift who advised me they would get a cardiologist down for as second opinion. I was left for what felt like hours. No one had done my OB’s and when they did my blood pressure, it was extremely high each time with a comment from nurse and doctor that it was normal for those readings in an emergency department environment and they were not worried as they said it was due to my anxiety.

I was then moved at 4am on October 18th 2021 to Logan Hospital short stay to which I overhead nurses handing over that I was taking up an unnecessary bed due to my obesity and I would be out soon enough. The change over ward nurse rudely said I should have gone back to the Gold Coast University Hospital and why was I there. That nurse did not do any OB’s on me from the time I arrived short stay to when she changed over shift at 7:15am.

My husband arrived at short stay at 7:30am as we have two year old. He could not come up during the night. My blood pressure was taken while my husband was there and it was 192/97. Again, extremely high. It was downplayed by the senior doctor that it was my anxiety and due to the pain I was experiencing and that they could not longer help me.

The senior doctor did not state his name. He came in and leaned against the wall and said: “What do you wish to achieve from me at this stage?” I replied: “An answer and some treatment moving forward so I can get better.” He rudely said that I won’t ever get an answer as there is nothing wrong with me, that all tests and ECG’s have come back normal. He stated that there was a high blood cell count but did not seem to stay on that topic as to why even when my husband quizzed him again. He said that I need to change my head and to understand I won’t get a diagnosis and that I need to go back to my GP and not come back to the hospital as they are no longer going to help me.

This is not normal. It is not right. I feel I cannot go back to the hospital for treatment and my GP has sat in front of me and said this is all because of my weight and asked my husband how long I have been chubby for and that it is all anxiety and I need to stop going to the hospital as it’s all in my head.

The discharge letter from the Logan Hospital stated that there “was” evidence thus far of pericarditis and myocarditis. I then proceeded to make an official complaint to the Logan Liaison Patient Office and also contacted the OHO Ombudsman. I received a phone call from the directing doctor of Logan Hospital, who I had a twenty four minute conversation with, regarding my treatment and the letter of discharge and conduct of the doctor’s who saw me.

The discharge summary that the doctor has specifically wrote up for my GP as a “care plan” was apparently incorrectly written and contains grammar error according to the directing doctor of the Logan Hospital. The doctor was on a fresh change over shift that started at 7am that morning and the letter was supposed to read: “there eis no evidence” thus far of ect. I was advised by that doctor not to attend emergency again and the directing doctor told me that all she can say to me is sorry. That she had a look over my record but when I was talking to her she only had a quick glance at my blood pressure and did not see over that my OB’s had not been taken or the fact of the ultrasound showing my heart chamber was more enlarged than usual.

I am just wondering to share my story with you all so there is evidence incase something happens to me as I am scared I am going to die as no one will run all tests or acknowledge what is going on. This was not a grammar error and I got pulled outside the Gold Coast University Hospital by the emergency department doctor so no one was in earshot and this was outside the exit and entry foyer with my husband.

I have a two year old son and I need this heard for not just him but for his future that I may not get to see if this keeps happening but to the many others that are suffering in the exact same position. Since having my mental health threatened if I keep pushing my symptoms and pain, I am suffering severe anxiety to be around anyone as I feel as though I am being thrown out to dry as a mental nutcase. My periods are so irregular that the cycle has completely stopped now. I have no energy. I tried to go back to the gym because everyone keeps on saying it’s my weight but I was on my weight loss journey fine before all this happened and when I walk at 4.2kms/per hour on the treadmill, my heart rate sky rockets to 185bpm two minutes in.

My blood pressure is still high, constant migraines, arm pain, chest pain, crams, and another thing to add — tingling in my legs and face. I am too anxious to seek anymore medical help. I would rather die at home then them pump me more full of drugs and threaten to call mental health and have my son taken away from me. I have been on TRS spray and folic acid, which has subsided the migraines but I still get them every few weeks. I have lost friends and family because of this. I feel alone and like I’m loosing each day trying to find willpower to try and keep fighting to see if time will heal.