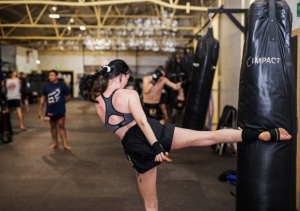 For the last two years, I’ve been training heavily in Muay Thai. I’ve always been a physically active person for the most part of my life so prior to the jab, I was always fit and healthy.

I got my first Pfizer vaccination due to the mandates on December 1st 2021. I didn’t rain for two days as I was advised not to by the nurse.

When I returned back to training, within five minutes I noticed tightening of the chest. I thought it might have been a panic attack and I took it easy for the rest of the session. As I was leaving, I noticed my right ankle was swollen and I wasn’t sure why.

The next day, I went to the doctor’s and I was told it was just a swollen ankle and I need to ice it. I took his advice and iced it for three days and it still wouldn’t go away. So, I went to another doctor who then told me I had just rolled y ankle and I Needed to elevate and ice it. I told him that I had just seen another doctor and I hand’t rolled my ankle. He responded: “You might have done it and just not remembered.” I was dumbfounded and told him I know what it feels like to roll my ankle but he still continued on the same narrative.

I was feeling defeated so I went home and four days later, the pain started increasing and spreading up my leg. I took panadene forte for a couple of days until I woke up in the morning to eight out of ten pain in my right leg going all the way from my ankle to my thigh. I also had a pounding migraine and I was sweating with a fever as well as feeling nauseous.

I went straight to the doctors (a different one to the last two) and started telling him my symptoms. The first thing he asked was if I had the vaccine. He took my blood pressure, which came back elevated. I have always been on the lower side. He had a feel of my leg and sent me off for a blood test and an emergency ultrasound on my leg to check for blood clots.

I called the clinic and although it was an emergency, I wasn’t able to get in until the next day. The receptionist said if my condition deteriorated, I was to go straight to the hospital because it could be a blood clot.

Later that day, I started feeling worse and I vomited a number of times. After five or six times, I had nothing to throw up so I was just dry retching.

I drove myself to the emergency room where I waited a total of three hours and as soon as I started speaking to the nurse, they were unhelpful and dismissive. By the end, they told me they wouldn’t be able to help because they didn’t have the equipment so I had no choice but to wait until the next day to get the ultrasound. The made me feel like I was just a crazy lunatic who was just overreacting.

So, I left and drove to my mums house and throwing up on myself all the way there.

I was then driven to another hospital where we then waited a further three and a half hours. I was put through a rapid test clinic and they told me they didn’t think it was a blood clot or anything serious. They told me that I would’ve done it during training and I Had just forgotten about it and sent me home with panadol.

The next day, exhausted and unwell, I went to my ultrasound appointment. The nurse pretty much hinted on the spot that it wasn’t good and told me to go straight to my doctor where it was then confirmed I had a blood clot in my right thigh.

He explained the blood clot started in my ankle when I “injured myself training” and then it detached from my ankle and travelled up to my thigh.

I was thinking to myself: “I’ve been kicked in the ankle by a full grown man and I was perfectly fine.”

He gave me a prescription for blood thinners and told me to take them for the next ten days and to book a follow up appointment five days in.

A couple of days in, I started to feel a little better but then the pain started to ramp up again. I went back and saw him and he said: “Well, you’re on blood thinners. What more do you want me to do?”

You should’ve seen my face…

Days passed and I finished the blood thinners. A massive bruised appeared where the blood clot was and it was extremely painful.

I waited another couple of days and I was starting to get the same feelings again from when it all started. I tried to get into a GP but couldn’t because of the holidays so I went back to the hospital again and I got the same results, which were they didn’t have the right equipment for her to test. I don’t know why I bothered after the first visit I had.

The doctor gave me some pain relief and a referral to go and get an MRI and another ultrasound for both legs and said to follow up with my GP and get scans done as soon as possible.

As I speak, this is where I’m at and I have no idea what to do or what is happening. I’m unable to see anyone until January 4th 2022. I now have my work asking me to get the second shot, which I won’t be getting, and I have a son to feed too. Stressful is an understatement.