It is definitely not normal for so many mainly young athletes to suffer from cardiac arrests or to die while playing their sport, but this year it is happening.

Many of these heart issues and deaths come shortly after they got a COVID vaccine. While it is possible this can happen to people who did not get a COVID vaccine, the sheer numbers clearly point to the only obvious cause. 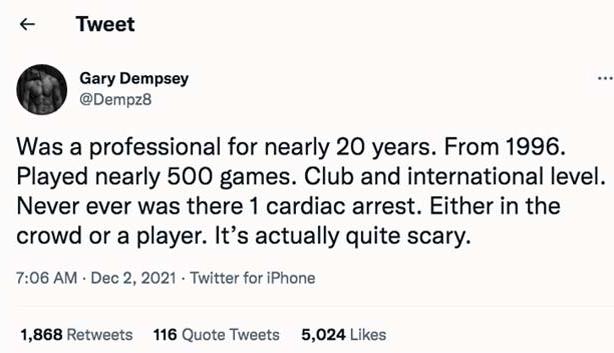 So in response to their pronouncement, here is a non-exhaustive and continuously growing list of mainly young athletes who had major medical issues in 2021/2022 after receiving one or more COVID vaccines.

Initially, many of these were not reported. We know that many people were told not to tell anyone about their adverse reactions and the media was not reporting them.

They started happening and ramping up after the first COVID vaccinations.

The mainstream media still are not reporting most, but sports news cannot ignore the fact that soccer players and other stars collapse in the middle of a game due to a sudden cardiac arrest. Many of those die – more than 50%.

So now we are receiving some messages saying there is no proof of the event or of vaccination status. That is partly because this information is being hidden.

More people are writing to tell us that in many cases, we didn’t mention a person’s vaccination status.

None of the media are asking these questions: So what should we do? Stop this now?

No, we will collect as much information as we can, while it is still available, because eventually, more information will come out, and we will be here to put it together.

Will it mean anything? We don’t know.

What we do know is that there is a concerted world-wide effort to make this information go away, so that fact alone tells us it must be collected, investigated and saved so other researchers can look at it to see if there are any useful patterns.

We really appreciate the athletes named in this list who have confirmed what happened to them so the truth can be known. They care about their fellow athletes, even if the clubs, their sponsors, media and politicians care more about money.

The International Olympic Committee in Lausanne, Switzerland, studied documents from international data banks from 1966 to 2004.

Those documents indicate 1,101 sudden deaths in athletes under 35 years of age, an average of 29 athletes per year, the sports with the highest incidence being soccer and basketball. (NIH Document)

A study by Maron on sudden death in US athletes, from 1980 to 2006 in thirty-eight sports identified 1,866 deaths of athletes with cardiac disease, with a prevalence of hypertrophic cardiomyopathy.

Thanks to investigator readers for discovering these reports, and this story in Spanish. Momento Deportivo.

Thomas Renz, an American lawyer says that the U.S. military’s DMED (Defense Medical Epidemiology Database) database shows that in the first 10 months of 2021, that “All cause morbidity” increased 11 times (1100%) against the previous year.

Renz has information from DoD whistleblowers. The DoD is reportedly actively deleting data from the database, possibly to cover up the genocide that has been perpetrated on military personnel.

Our ongoing updates to the chart in this post clearly shows the growth of adverse events on sports people.

One person said we were hiding things because we’re only showing “the barest” of 2022. Sorry about that, but we don’t have a crystal ball to see into the future.

The only things we expect are that a) some people will continue to be “surprised” about the number of athlete deaths over the coming months, and b) although it is February, injuries and deaths that happened in prior months will be continue to be discovered in the future.

We know that we do not have all of the cardiac arrest reports and we don’t have all of the deaths. The sports clubs are still hiding the cases where players did not die and did not make it into the news.

We suspect that many players that “suffered from a mystery illness” were told to go home, rest and suffer in silence.

The dates of first “available” vaccinations vary all over the world, in different states and different cities.

We have a small collection of data in a separate story and we know there were trials in the months before official rollouts, so just because a country started its rollout on a particular date, that doesn’t mean some people didn’t receive their vaccinations in the weeks and months earlier.

If we get definitive proof that someone was not vaccinated, we amend the record.

Officials and the media are now doing a great job of hiding all the useful information. They are also calling vaccinated people unvaxed if it hasn’t been more than two weeks after their vaccination, and if they are due for their booster and they don’t get it, they are labeled unvaxed. (i.e. the government and media are telling lies – it is a clever scheme, but it is still a lie.)

For example, Australia’s first human trials of a candidate COVID-19 vaccine was the Novavax NVX-CoV2373 in Melbourne by 26 May 2020.

There is no documentation showing who took part in the trials The Therapeutic Goods Administration approved the Pfizer–BioNTech vaccine on 25 January, the Oxford–AstraZeneca vaccine on 16 February, and Janssen vaccine on 25 June. Phase-1a started on 21 February 2021 and phase-1b of the roll-out began on 22 March.

Phase 3 is the point at which thousands of people are vaccinated, prior to consideration for approval for rollout, and people were being vaccinated in the previous months.

Here is a demonstration of how sports clubs do not want the injuries of deaths of their players to be associated with the COVID vaccines.

It tells the story of why they will not report which of their players has been vaccinated and when.

Sunderland FC manager Lee Johnson suggested that the COVID vaccines may have caused the heart issues for his goalkeeper, Lee Burge. The club then sacked the manager.

Form your own conclusions as to why the club would sack the manager who cares about his players.

The so-called fact-checkers are trying to say that because we don’t always have definitive proof of vaccination, then 100% of the data we’re collecting is worthless. Well, good news, fact-checkers, you are not only wrong, you are idiots.

While historically there have been a relatively small number of athlete deaths each year that weren’t from old age or cancer, there has never been anything like what is happening since the COVID vaccination trials started.

And they know it, but they don’t care. We will continue to gather as much information as possible about every person who dies. These are real people, not just numbers.

As we said elsewhere, we’re collecting data. Other people can use this data and add to it, if they can, to research whatever they want.

We won’t de distracted from that, even if families, clubs, governments and the media hide information from us. We don’t want to hurt families, but families can’t hide real data because that could harm other people.

According to governments, 90-95% of populations all over the world are now vaccinated, so the fact-checkers have a problem. If that is true, then just about everyone is vaccinated.

If it isn’t true, then governments are lying, possibly for the purpose of coercing those who don’t want their vaccinations, for various reasons.

We will publish as much data as we can find, and from time to time, we and readers will discover information that wasn’t found earlier, and it will be added.

Where Are The Fact-Checkers?

Readers are writing to us asking for comparisons from previous years. Some say without that, these results mean nothing.

That’s not true because if we had seen this in previous years, it would be well known and others would have documented it. We are starting to work on this – it is a lot of work.

Where are the fact-checkers? Where is the mainstream media?

Some have piles of money from Bill Gates. Why are they not proving us wrong by all piling on and showing the documented Athlete deaths from 2019, 2018, 2017 and the previous decade?

They are nowhere to be found because this number of athlete deaths is abnormal and they know it.

They have money from people who don’t want journalists poking around. So that’s why they don’t try to thoroughly Fact-Check these reports or show previous year numbers.

Follow this link to see Gates Foundation handouts to some media that could do it. For example, NPR in the USA received $24 million.

The Gates Foundation also funded many investigative journalism centers, with around $38 million. Could that be why journalistic curiosity suddenly stopped being a thing?

A few weak attempts at “debunking” this data have started to come out, but they cherry-pick a small number of the entries. 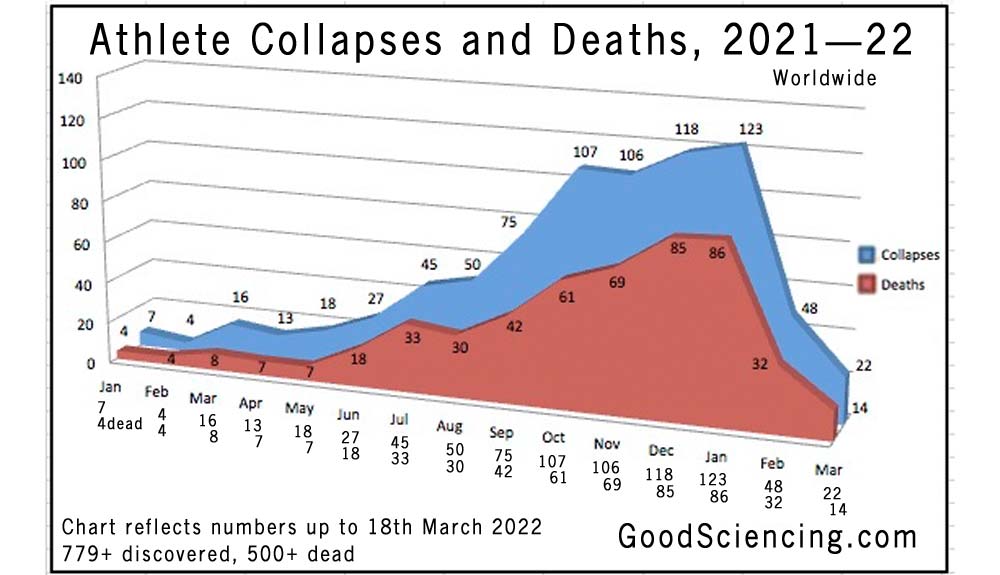 Repeat This After Reading Each Line 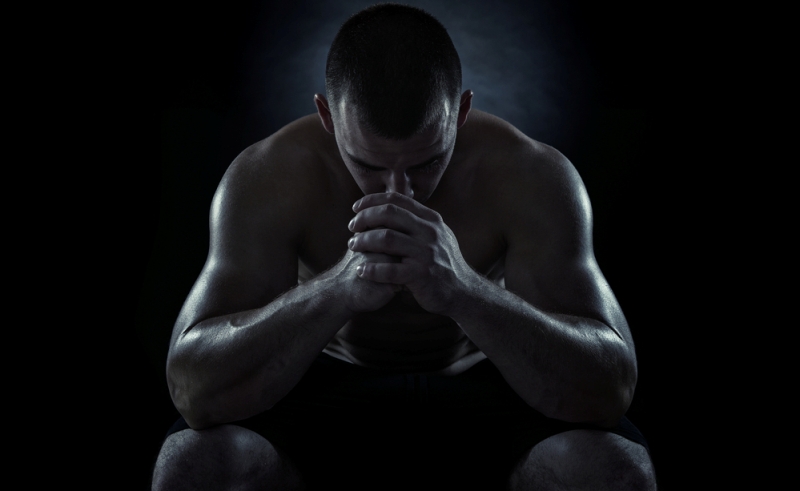