Elon Musk has pointed out that the Trump-endorsed social media app Truth Social is currently beating Twitter on the Apple App store charts, suggesting this as a casualty of free speech suppression.

“Should be called Trumpet instead!” 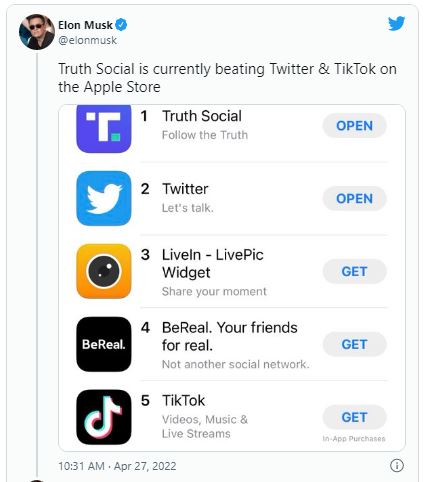 Name change suggestion aside, Musk’s tweet is clearly his way of pointing out that large swathes of the public want a platform where speech isn’t censored.

“Free speech is the bedrock of a functioning democracy, and Twitter is the digital town square where matters vital to the future of humanity are debated,” Musk declared in his first announcement after buying the social media company.

Trump is insisting he won’t return to the platform, telling Fox News, “I am not going on Twitter. I am going to stay on Truth.”

“I hope Elon buys Twitter because he’ll make improvements to it and he is a good man,” he continued, “but I am going to be staying on Truth.” 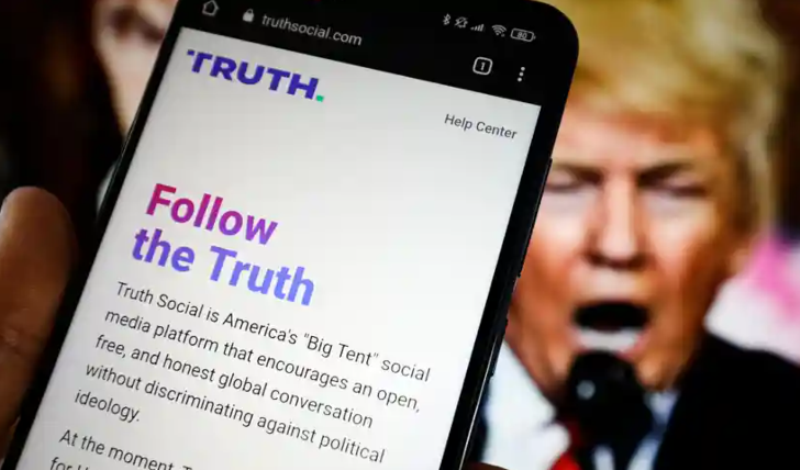 ANR Founder and Co-Founder of Truth Group suggests Elon Musk to invest into and help launch half a dozen censor free social media platforms of Truth Group including TruthTweet (a Twitter alternative) https://truthtweet.social/.

As mainstream media dies, Truth Group https://truth-group.com/ and its platforms rise. Alternate independent media and alternate social media is booming. Every billion in market cap they lose is for the Truth Group to gain.

Some of the Apps are launched already, such as Truthbook.social the alternative to Facebook with tens of thousands of users already posted over 100,000 posts in its short time since soft launch, with many becoming available soon.

Truthcoin is the currency behind Truth Group new apps, and it will be listed on selected crypto exchanges in late May 2022 to enable supporters to help fund this critical and much-needed alternate social media platform. Truthcoin set to launch its payment system TruthPay and list early June on Crypto Exchanges as TruthPay and TRP as its Exchange Ticker

Truth Coin is a large supporter of independent media and “Take back Our World” objectives and it launches its Pre ICO ahead of Early June listing.

Truthcoin’s Pre ICO Round Round 2 is now open at just $0.04 cents, a fraction of its set listing price of $0.20 cents USD on crypto exchanges in early June 2022.

Smaller donors can donate $250 or $500, but only qualify to get the coin at $0.15 cents, not $0.02 cents. For details on how to access this opportunity, click: https://www.truthcoin.social/truthcoins-ico

PrevPreviousAre There Any Daily Print Newspapers in America That Report the Truth About the Vaxxines, Masking?
NextMusk vs. Trump? Elon Slams Truth Social for ‘Terrible Name’ After Deal To Buy TwitterNext