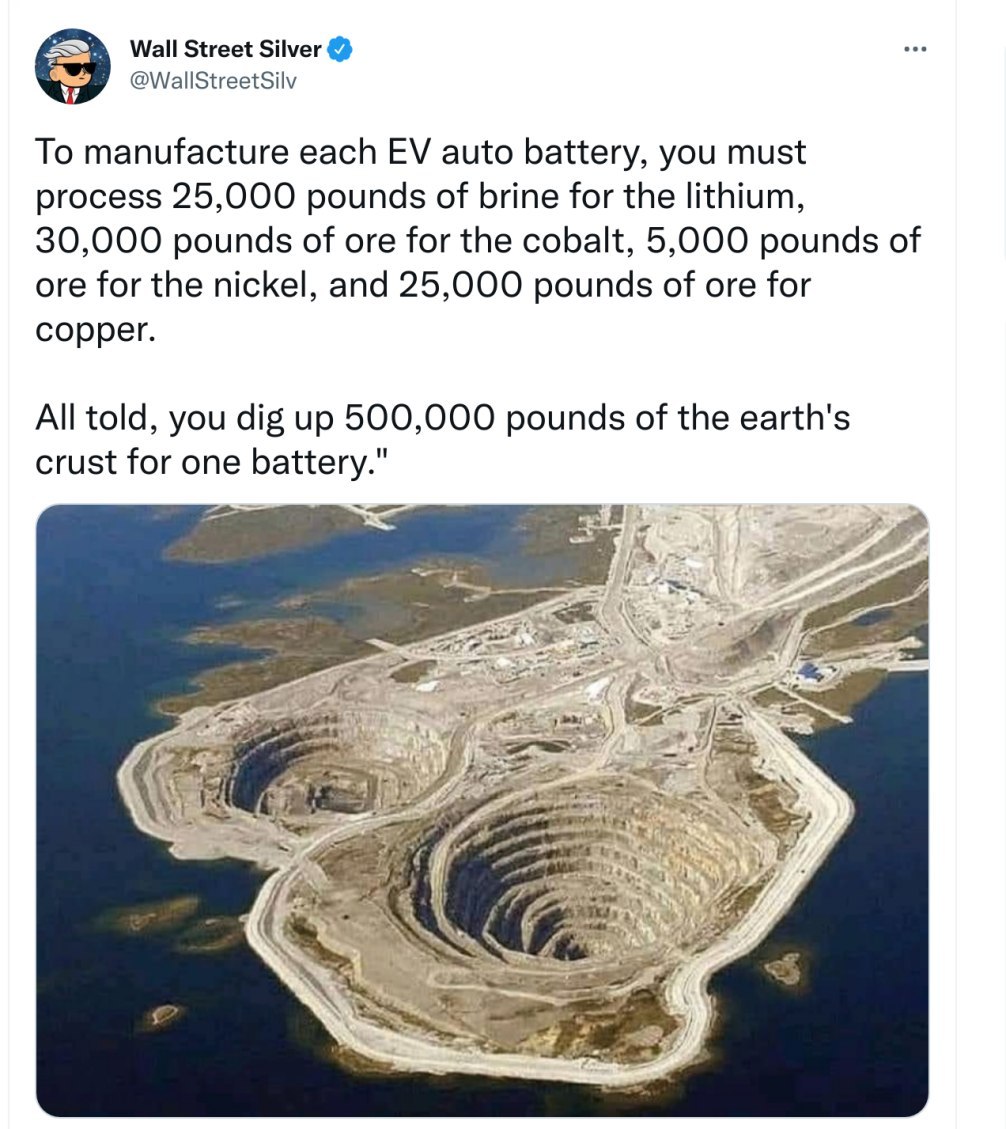 And each of these half a million pounds of earth are dug up with a diesel engine.

Batteries, they do not make electricity – they store electricity produced elsewhere, primarily by coal, uranium, natural gas-powered plants, or diesel-fueled generators. So, to say an EV is a zero-emission vehicle is not at all valid.

But that is not half of it. For those of you excited about electric cars and a green revolution, I want you to take a closer look at batteries and also windmills, and solar panels.

A typical EV battery weighs one thousand pounds, about the size of a travel trunk. It contains twenty-five pounds of lithium, sixty pounds of nickel, 44 pounds of manganese, 30 pounds cobalt, 200 pounds of copper, and 400 pounds of aluminum, steel, and plastic. Inside are over 6,000 individual lithium-ion cells.

The main problem with solar arrays is the chemicals needed to process silicate into the silicon used in the panels. To make pure enough silicon requires processing it with hydrochloric acid, sulfuric acid, nitric acid, hydrogen fluoride, trichloroethane, and acetone. In addition, they also need gallium, arsenide, copper-indium-gallium- diselenide, and cadmium-telluride, which also are highly toxic. Silicon dust is a hazard to the workers, and the panels cannot be recycled.

Windmills are the ultimate in embedded costs and environmental destruction. Each weighs 1688 tons (the equivalent of 23 houses) and contains 1300 tons of concrete, 295 tons of steel, 48 tons of iron, 24 tons of fiberglass, and the hard to extract rare earths neodymium, praseodymium, and dysprosium. Each blade weighs 81,000 pounds and will last 15 to 20 years, at which time it must be replaced. We cannot recycle used blades.

There may be a place for these technologies, but you must look beyond the myth of zero emissions.

“Going Green” may sound like the Utopian ideal but when you look at the hidden and embedded costs realistically with an open mind, you can see that Going Green is more destructive to the Earth’s environment than meets the eye, for sure.

I’m not opposed to mining, electric vehicles, wind, or solar. But showing the reality of the situation.

PrevPreviousJuliet Valdez: 56-Years-Old Philippines Teacher Dead 12 Weeks After Second Sinovac Injection as Country Mandates “Vaxxines” for All Workers
NextSenator Rand Paul Has Announced That He Intends To Introduce an Amendment in the Senate To Prevent Anyone From Ever Again Becoming a Health ‘Dictator in Chief’Next