Because apparently the unprecedented and outrageous $40 billion that the Senate just approved for Ukraine aid wasn’t enough, the Biden White House has just announced $100 million more in military assistance to the Ukrainian government Thursday afternoon.

As The Hill emphasizes, this came literally “moments after the Senate sent a $40 billion supplemental aid package to the president’s desk.” More, more, more will now be the order of business, the American taxpayer and debt placed on their children’s children be damned.

The news of the fresh additional $100 million came as part of the same statement wherein the president hailed Congressional passage of the $40 billion. Biden said in a written statement the US has already provided a “historic” amount of security assistance to Ukraine to date.

He detailed what the new $100 million is expected to deliver: “…I am announcing another package of security assistance that will provide additional artillery, radars, and other equipment to Ukraine, which they are already using so effectively on the battlefield.”

He described further, “These weapons and equipment will go directly to the front lines of freedom in Ukraine, and reiterate our strong support for the brave people of Ukraine as they defend their country against Russia’s ongoing aggression.”

In a separate statement, Secretary of State Antony Blinken said the weapons will be coming from the Pentagon’s existing inventories.

This despite that already over the last month Congressional leaders and defense officials have raided concern over depleted US defense supplies, especially items like anti-tank missiles.

By the time the war is over, Lockheed Martin will be worth $1 quadrillion. https://t.co/Lkw68nQgVh

He said, “The United States military has probably sent about one-third of its Javelin anti-tank missiles to Ukraine — one-third of our supply given to them.”

Further Sen. Jack Reed of Rhode Island warned weeks ago: “We have a significant usage rate for the Stingers that we’re moving over there ― Javelins, also ― and we have to not only be able to help the Ukrainians, we have to maintain our stocks.”

Bernie Sanders just voted YES on funding the US proxy war in Ukraine to the tune of $40 billion. So now it's officially on the record that every national politician associated with the activist "Left" is completely on board with escalating the war. That's what the "Left" is now

But it seems amid the massive Ukraine money and weapons handout and euphoria, few in the administration are pausing to think about America’s own defense interests as of paramount concern. This also as the Democrats have firmly established themselves as the ‘pro-war’ party. 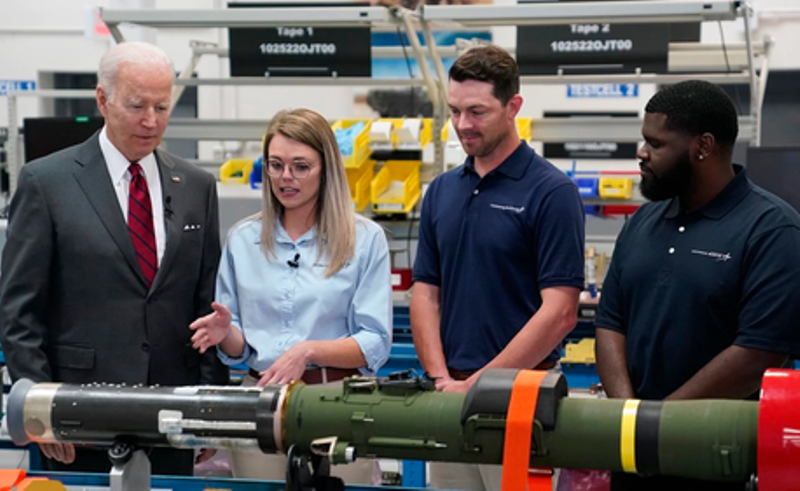