From the ground with our friend Real Rukshan and our Melbourne team. Police Rescue absailing teams deployed to remove activists from Level 1 where Novak Djokovic is being held as a political prisoner of the Scott Morrison Regime. 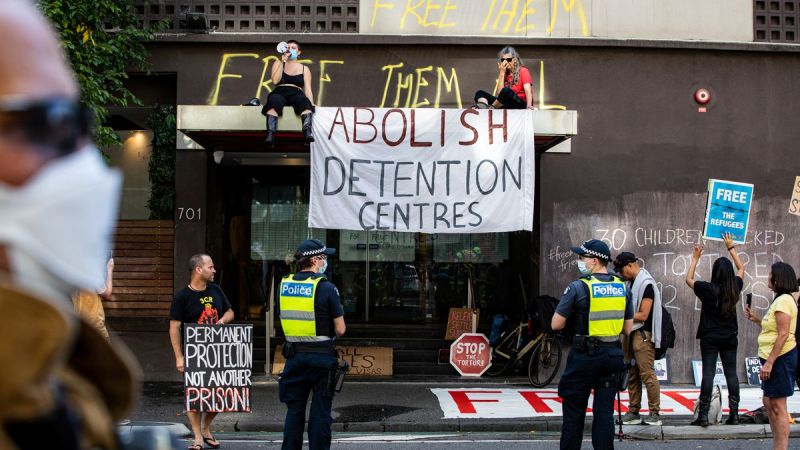 Mark Sposito
As an ex serviceman to Australia, I’m so disgusted with the polices that seem to be enveloping our country. I now know I was led down the Australian garden path to this distopia. I love my country and it’s people, but I’m so ashamed of our leadership.
We can do better Australia!

Georgy Porgy
This is what it means to say “NO” to our government. Yes there are real consequences to standing up to tyranny however power to you & to everyone who actions this level of grit & sacrifice. Without this kind of push back evil will conquer us. Novak you were very generous to donate money to our bush fire appeal however that is small change compared to the fight you are fighting now. You are sacrificing your entire being for the freedom of all Australians and for all of humanity. I love, respect and honour that you are using your platform to shine a light on the disaster this Australian government is. Good for you for not bowing down to tyranny. God is with you and your reward for this will be immeasurable. Australia and the world wake Up!!!

Patriots Daughter
Start the year as we mean to go on, by holding the line and never giving in ✊🏻 Respect to you all.

OfficialN8oR
Imagine the embarrassment of the parents whose kids wanted to become cops.

Satire of Circumstance
Humans are visual. Images are very very powerful. For just one instance, the “Tank Man” from the Tiananmen Square protests is an icon of the Little Guy standing up to the Big Guy. One image of Novak looking out the window from his current situation onto the support outside could win a lot of hearts and minds.

joshua cainero
We should thank Novak for bringing awareness to the situation other people have to deal with all the time. I cant wait until the world sees this.

Gavin Smith
Good to see Rukshan there too, to the freedom fighters, and appalled by the police attempting to incite violence from the people who they have sworn to serve and protect

Elyas Toohey
Whilst it sucks for Novak, it’s honestly great to shine the light on the fact that a lot of the people locked up are genuine refugees, they may have broken the law skipping the line, and may have to be deported at some stage, but they dont deserve to be kept up in some little apartment for years on end.