Here are five things you need to know about Mass Formation Psychosis!

Mass formation psychosis is alleged to be a method of mind control that tyrannical rulers use over the people. In truth though, mass formation psychosis is a right wing conspiracy theory. It’s obviously not true along with 100% of all words that right wing people say.
Mattias Desmet has done a lot of research on this phenomenon. And now I get to teach you everything you need to know. 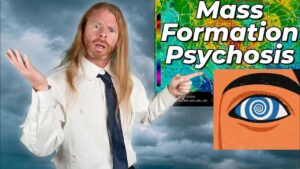 A
Unfortunately, I suffer from one type of mass formation psychosis…I agree with a large number of people who believe JP is unstoppable.

Paul D’Attilio
JP is a genius. He has a great way of opening up your mind and teaching all of us to think for ourselves.

Ashigeru47
I guess I’m old school.
I learned as a child to “Question Authority”, and “Question Everything”.
My parents taught me to “Think for myself”.
I was taught critical thinking, how to spot propaganda narratives, and logic in college. In the military, I was trained to troubleshoot systems to locate problems and figure out workable solutions.
When I hear media telling me what to think, I immediately break down and analyze their reasoning, check their facts, and question the narrative, and the motives. Often I find that the media lies intentionally through omission of facts, and framing.
Many young people are naive enough to believe what they are told by alleged “experts” brought in to sell the narratives. After all, the “experts” know more than everyone else, and don’t have a motive to lie, right?… Only the naive, or uninformed believe what they are told unquestioning.

Pound ver Magnuson
It has warmed my heart to see four provinces of Canada strike down mask and vax mandates. I myself got a couple of jabs but then and now my loyality is 100% for the unvaccinated and especially those who are against vax mandates. You have a right to oversee your health as best as you see fit and as long as America exists, you always will.

bla bla bla
This guy deserves a bravery medal for speaking up right from the start when few where and continued all the way thru- the fact he didn’t get cancelled amazes me . Thank you JP

Mario
For years I wondered how was possible for Germans to simply give power to the Nazis and allow their atrocities. This pandemic has made understand it much easier.

J Schiek
The number of otherwise sane, rational, decent people I’ve seen blandly (blindly) repeating the company line and trying to reanimate months dead rhetoric has been absolutely astonishing. I suppose it shouldn’t be, but it’s certainly evidential of what JP is talking about here. Thank you again, JP, for speaking truth so plainly and openly. I hope it continues to open more eyes. What you’re doing and what you’ve done is so incredibly important.

jerry stultz
JP hits another homerun!!!! I love this guy and how he gets the point accross by explaining how people currently behave no matter how appalling their behavior, he calls them out while being hilarious.

Ashten Halee
1-5 have an anxiety disorder. I was put on benzodiazepines to treat my anxiety/panic attacks, then I woke tf up, changed my diet, started at elevation church, and go to the gym 6 days a weeks. So much has changed for me in only 2 years, thanks to people like you JP!

PrevPreviousDr. Malone Exposes Spotify Censorship of Joe Rogan, He Followed the Money to Moderna
NextAlex Jones Breaks Down the Rising Cases of HIV Following Mass Vaxxinations, and the Big Pharma Solution To Inject the Population With More mRNA Bioweapons To Counter Their Deadly C0VID JabsNext