It now appears that the nation of Canada has fallen. The once-free country is now under UN occupation and globalist control, with no remaining mechanism for the restoration of democracy. Trudeau and his Nazi deputy Freeland have declared that no one can speak against the government, or they will be hunted by police and prosecuted under some sort of emergency powers. In doing this, Trudeau and Freeland have taken peaceful resolutions off the table and seem to be trying to invoke violence across the nation. 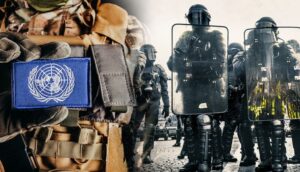 Grandes Buenas Ideas
How about ESPERANTO lenguage ?
And we want to be on the Spanish Channel, we are from Argentina.

Linda Kachur
Canada’s Truckers did one thing that was truly astounding. They flushed out the Communists out into the light of day, no matter how their statements are couched. The truckers forced them to show their hand, and they have gone all in! Those who are still asleep must their moments of doubts and fear.

Larry Cox
These are not police?
We have lived in a dream world for quite a long time! A world where the police actually consider themselves part of the community and care about the people they interact with, even the petty criminals and mentally ill. This is not the “normal” function of police! Their historic function is to enforce the edicts of the central government. Their historic image IS goons! So we should not be highly surprised at what the police are doing. They are just following orders.

Really UN troops? Though this is possible, this is not confirmed. And we should begin to confront the fact that this can happen to our own friends and neighbors if they are pushed into a corner. They will side with the state because the state has the power to destroy lives and livelihoods. The state should not have that power, but we granted it to the state in the hopes that it would only use its power to protect us from criminals. All the criminals have to do is take over the government, and they become “safe” and everyone else comes under threat and duress.

By the time most people realize what has happened, many lives will be ruined or lost and the human cost of correcting the situation will skyrocket.

catherine
Freeland is a Rhodes scholar. This is important to know about her. It fits in with her family’s Nazi background. It is important to know how many people in positions of power in governments in particular, are Rhodes scholars because they have all been groomed to believe they are the ones chosen to rule the world. Research this and you find it was started by Cecil Rhodes, racist Prime Minister of Cape Colony in Africa, ardent believer in British imperialism. (Bill Clinton is also a Rhodes scholar.)

catherine
Canada has never been a free nation. It has always been controlled by the moneyed in London. With its legalization of abortion in 1988, it ended any notion of support humanity. And with its socialized health care, the country has definitely denied freedom as the state has complete control of ones mind and body.

PrevPreviousPediatric Assistant Sónia Azevedo: 41-Years-Old Is Dead After Receiving The Experimental BioNTech/Pfizer mRNA C0VID Vaxxine
NextThe WEF Have Published This Report in Which They Say That the Vaxxine Passport Is Your Digital IDNext