Tombuchaill
Is this a mainstream press release or is it only the truth searchers getting to see this.

Nicholas
Does anyone have the full transcript typed?

Mortly123
I just watched your soldiers slaughter civilians. Evil Ukraine should be invaded.

DeltaDawn55
Anyone who knows Truth knows that the Biden family and those pulling the strings in the US government are reprobate minds…godless…corrupt…with no conscience…no honor…they have been absorbed by Darkness and they submit to their father, Satan. John 8:44

dshulse
Watched it to the end, and at this point, he thinks that Zelenko, whom he describes has behaved more like a “bunny”, is the only one who can right these wrongs done to the Ukrainian people. He refers to events as late as August of 2020, so it had to be presented sometime after that, and while Mnuchin was still Secretary of the Treasury. The timing of Sanctions would indicate when this was presented. So fast forward to today and the idea that a “bold” Zelenko could be accomplishing what was needed for the Ukrainian people is perhaps occurring in the only way it possibly could, via the military arm of Russia to as Putin put it, in an effort to “de-Nazify” the region. There are very damning accusations in the presentation with regard to both Biden and George P Kent.

FredAlago
Isn’t this the corrupt guy who got busted? and this happened when Ukraine was waiting for money from former President Spanky? It doesn’t matter – after the Great Reset, we will all be like Africans anyway.
I think the best thing to do is end it all now so we don’t cry about the sky falling every day.
MAGA!!! TRUMP/GREENE in 2024!!!!

TRD
I remember this, it took place over a year and a half ago, about the same time Ukraine issues an arrest against Biden for crimes against Ukraine.

TheresaGV
I saw this video a couple of years ago. I do believe Biden is guilty but nothing was ever done about it. Hopefully, Biden will eventually be charged with his corruption along with his son Hunter! 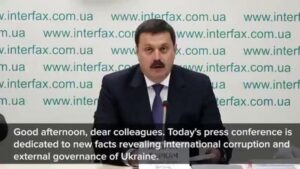